My kidney donation was the most common kind of donation — a direct donation. This means that my kidney was a suitable match for my intended recipient and went directly to her. During the process, I learned that if I was not a match, I could still help my friend by entering into a paired exchange.

I was not able to find official stats on how many transplants involve a paired exchange or donation chains and whether that is becoming more common. Direct donation was by far the most common amongst 278 survey respondents who answered the question.

I shared in the post about this survey’s sampling bias that I’ve been most fascinated by how the process and experience changes based on the living donors relationship to their recipient. Maybe it’s not that surprising that donors who came forward to benefit a family member or close friend were more likely to be part of a direct donation than donors who had no particular recipient in mind.

The social worker assigned to my case said I’d be surprised to realize many people who go through the process do not inspect the decision nearly as much as I did. If you’re reading this blog, I’m sure you’re not surprised to hear that. For me, this made the evaluation and decision-making process to be incredibly stressful.

At the end of the day, there is a high stakes decision to be made and, assuming they are medically fit, the prospective donor is really the only one can make the call. My personal secret weapon against the overthinking was to map out the scenarios I actually had control over and to establish clear boundaries for myself up front.

For example, “I will do it if X” but “I will not do it if Y.” I was all in if I had my family’s blessing but I was not willing to do a paired exchange. I could try to explain my rationale, but it really doesn’t matter. What matters was that it was my decision and I found it helpful to figure out upfront where I drew the line.

I asked the respondents who were involved in donation chains how many recipients were involved in the chain they were a part of. It’s cool to see how many matches can be “unlocked” with one more person coming forward.

One of my concerns about a paired exchange was how it would impact my timeline. I wanted to help my friend, but I also wanted to get on with my life. Even as a direct donor, the waiting and timelines could be agonizing. I didn’t have a good frame of reference but I assumed that more variables would mean more waiting.

I asked the survey respondents who were part of a paired exchange how long it took to find a match. My guess is some recipients are harder to match than others, but think it’s encouraging that 60% found a pair within 6 months.

I didn’t realize until reading the answers to the open-ended questions that not all transplant centers offer paired exchanges and do not have much experience with that part of the donation process.

I wonder what would happen if more centers offered and more actively encouraged paired exchanges and donation chains over direct donations. Would people on the list get the kidneys they need faster? Would the list get any shorter? There are initiatives underway to try to get more people to come forward as living donors. I would love the doctors and mathematicians to also think through how we can maximize the impact of the donors who do come forward.

Relationship With The Recipient

I asked donors who were part of a chain or paired exchange a few questions about their relationship with their recipient.

Of the 61 paired and chain participants who answered the question, it’s pretty even between those who have an have not met their recipient. Keep in mind, many of the survey respondents were recent donors so these answers in particular may change over time.

34 survey respondents who have not or not yet met their recipients shared their feelings about not meeting their recipient.  I thought those who were paired or chain donation to benefit a family member or close friend might be less bothered by not meeting the person who got their kidney, but there was no statistically significant variation based on who the intended recipient was.

Amongst the donors who have recipient, 27 shared their feelings on that part of the experience. These are pretty small numbers to start with and are really just meant to help illustrate how different individual experiences might be. 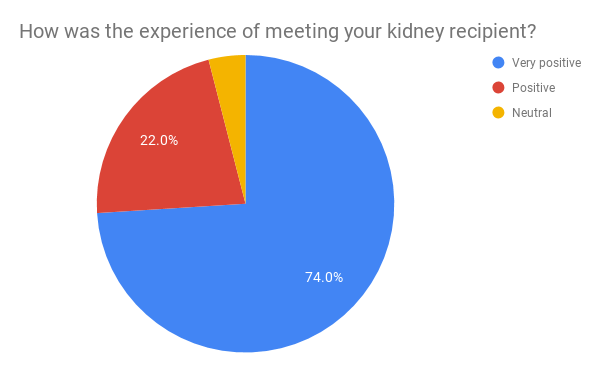 Similarly, I asked how often the donors in a paired exchange or donation chain who did meet their recipient kept in touch. This question is funny to me because I’m sure there’d be just as much variation if I asked how often they talked to their parents or siblings. Everyone is so different.