When I first started creating the living kidney donor survey, long term outcomes was by far the number one topic I got feedback about from other donors and the question set I spent the most time formulating. Donors and prospective donors want more information about how the surgery will impact their long term health and many believe there aren’t any long term studies to satisfy that need.

True, there are no crystal balls. We really cannot predict long-term outcomes at the individual level, but one living kidney donor wrote in the open ended questions there actually have been a few more official, peer-reviewed, long-term studies about long-term outcomes of living kidney donors. I agree with that person’s assessment:  The real problem is word isn’t getting out and information isn’t as accessible as it needs to be.

Another donor shared an opinion that helping prospective donors understand the findings and their significance isn’t incorporated as well as it could be in informed consent procedures. Some donors, even after going through the process, believe we are born with a spare kidney that could be removed without consequence.

How would you rate your overall health today?

Keeping it really simple, I asked survey respondents how they would rate their health overall today. 93% said their health was either good or very good. These numbers do not change much, or in any statistically significant way, when I filtered by time since donation, gender, or procedure type.

Was your creatinine within a normal range the last time you had it checked?

Donors often track creatinine numbers before and after donation as a way to understand overall health. Everyone’s body is different and I didn’t want to encourage anyone from fixating on a specific number or comparing their numbers with someone whose medical history they know nothing about.

Instead, I asked if their numbers were within a normal range. For reference, I cited that in the US, 0.6-1.3 mg/dL is considered normal for adults.

76% of the 265 living kidney donors who answered the question said that their numbers were within a normal range. When I filter out those who say they do not track their creatinine, that number jumps to 83%.

Of the 42 respondents who said their creatinine is not within a normal range, 14% said their doctors are concerned. The assumption is that high creatinine levels indicates a reduction in kidney function.

Was your GFR within a normal range the last time you had it checked?

Similarly, I asked the survey respondents whether their GFR was within a normal range and cited that in the US, a normal range for GFR is 90 to 120 mL/min. Only 76% the 265 who answered this question track this number compared to 92% who track creatinine.

Amongst those who track their GFR, 97% said either their numbers were within the range I provided or that it is not but their doctors are not worried about it.

The last time you had your blood pressure checked, how did it compare to your pre-donation numbers?

Your kidneys are responsible for helping regulate blood pressure. When one kidney is removed, the remaining kidney needs to work a little harder and, as a result, your blood pressure may go up a little. I didn’t give normal ranges on this one, but just asked for a comparison of before and after to get a rough sense. 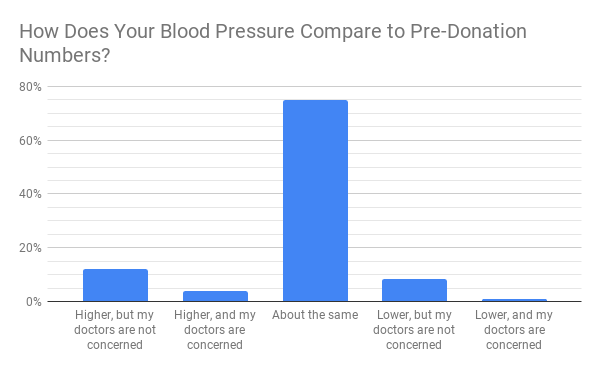 As with all of these questions, I wish I had also asked “Are you concerned?” Based on personal experience and my observations in the social network groups for living donors, sometimes even when our doctors assure us that our numbers our fine, getting used to our new normal can take some getting used to.

Which of the following issues did you experience after your kidney donation?

In attempt to simulate a long term study, I asked a repetitive set of questions that asked donors to identify issues they experienced within specific timeframes from 1 month to 10+ years after their surgery. If they donated less than a certain timeframe, the survey logic was set up to skip that question. Whether medically proven or not, a percentage of living kidney donors in every timeframe reported experiencing issues that they believe to be related to their donation.

Alas, yet another donor wrote in to remind me that there were structural problems with the survey and it would be dangerous for me to try to make assertions about the specific issues that living donors who took the survey reported. This is true — given the small sample size, even smaller number of donors who stuck with this optional portion of the survey, and the fact that I have no knowledge of any of their specific history, I don’t feel comfortable going too deep here and encourage prospective donors to do their research.

But there were some interesting takeaways…

I stress that they are reporting issues that they believe to be related to the kidney donation because I also asked if their doctors acknowledged the issue was related to their surgery. Given that, in the US at least, we only track living donors for two years post donation, it is interesting to note that the percentage of donors who do not even discuss the issues they experience with their team does up. 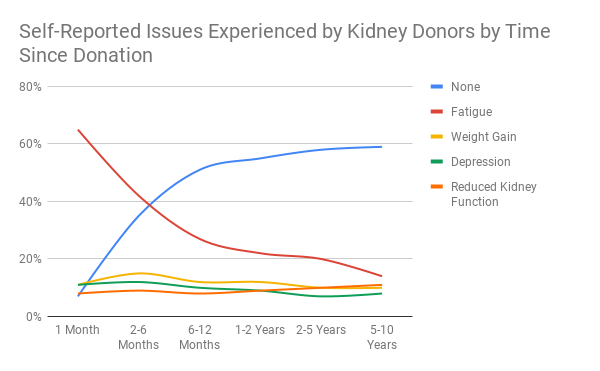 Again, this survey question was complicated and is only a rough proxy for long term outcomes amongst a small and specific group of donors. I recommend prospective donors ask their medical teams for more information and research about the particular long term issues they are concerned with.